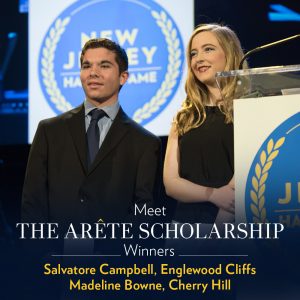 I am honored to have been selected as the female recipient of the New Jersey Hall of Fame Arête Scholarship. My memories of the induction ceremony on April 7th, 2015, will stay with me forever as I go forward in my career, serving as both inspiration and motivation.

After hearing the famous men and women share their stories of success at the induction ceremony this year, I saw for myself the power and influence of Arête. Every person inducted into the Hall of Fame possessed a spark, a spark that helped to set them apart, a spark that allowed them to find their highest sense of self.

Sinclair Lewis, while addressing students, asked them, “How many here are really serious about being writers?” After many raised hands, he asked, “Well, why aren’t you all home writing?” Then he walked out. Lewis’s dramatic inquiry makes a point: one does not learn to do anything well while confined to a room with four walls. Writing is mastered by going outside; by acquiring practice and experience.

Arête isn’t passive, it isn’t sitting down, and it isn’t conformity. Those who achieve Arête are active, standing up, and making their own path. Dreaming is easy. Doing is hard.

While on stage on April 7th, standing where many of New Jersey’s finest dreamers and does have stood, I felt all the more determined to follow in their example.

When I look at all the great people that are part of the New Jersey Hall of Fame and the many adversities that they have overcome, I am motivated and determined to work hard to achieve excellence in everything I do. Through hard work, courage and determination, I can overcome any hardship or adversity and achieve excellence, give back to the community and reach my highest sense of self.

Jackie Robinson once said, “A life is only as important as the impact that it has on the lives of others.” Thank you to the members of the New Jersey Hall of Fame for being role models to me. I hope that I in turn can be a role model for others because “Everyone Needs a Hero!”