Look Who Joins the NJ Hall of Fame Greats

Look Who Joins the NJ Hall of Fame Greats 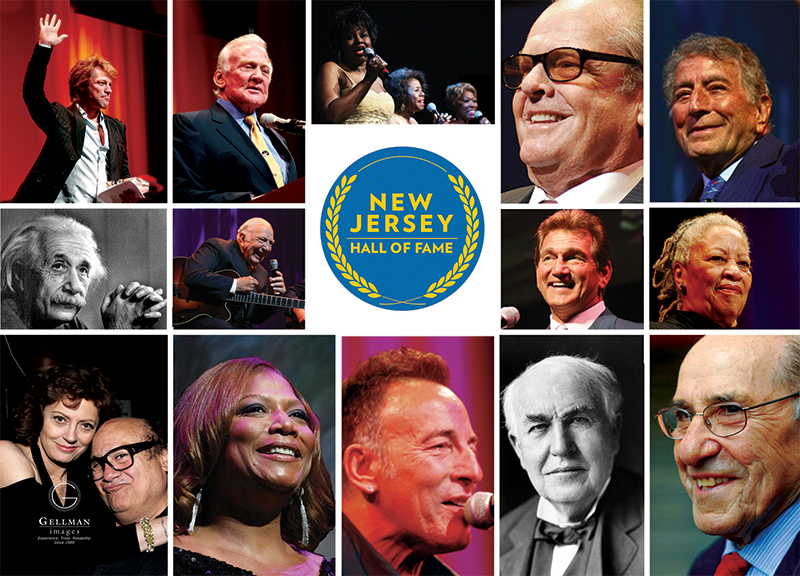 The New Jersey Hall of Fame announces the 15 newest inductees to be honored at this year’s Induction Ceremony on May 7, 2017, at the historic Convention Hall in Asbury Park, New Jersey. The distinguished Class of 2016 currently includes:

All living inductees are expected to attend the 2016 Induction Ceremony; a friend or family member will represent inductees who are no longer with us. The New Jersey Hall of Fame may select additional inductees based on their availability for the ceremony.

“Induction into the New Jersey Hall of Fame is the highest civilian honor that our State can bestow on someone,” said John Keegan, Chairman Emeritus of the NJHOF Foundation Board. “It’s a celebration of New Jersey and its greatest achievers, and a recognition of role models for our next generation. This is New Jersey’s version of the Academy Awards, so attendees can expect some surprise celebrity appearances.”

The official 2016 Public Vote ballot contained 50 nominees – 10 in each of five categories: Arts & Letters, Enterprise, Performance Arts, Public Service and Sports. The public voting, along with input from the Hall of Fame’s Board of Commissioners, determined this year’s class. More information about the selection process and the “Recommend a Nominee” is on our website.

The recipients of the second annual Areté Scholarship will also be recognized at the Induction Ceremony. Named for the Greek concept of “Areté” meaning the realization of one’s highest potential, these $5,000 scholarships are awarded to New Jersey high school seniors to help them achieve their potential. Students can apply for scholarships online at www.njhalloffame.org/arete before the deadline on March 17, 2017. The Areté Scholarship is provided in partnership with the New Jersey Education Association (NJEA).

THE NEW JERSEY HALL OF FAME CLASS OF 2016

This longtime Middletown, NJ, resident is a renowned journalist who has hosted 20/20 and the CBS Evening News. In 1993, she became the first woman to co-anchor CBS Evening News, as well as the first Asian and the second woman to anchor one of America’s major network newscasts. She has been an anchor and reporter on NBC, CBS, ABC, CNN, and MSNBC.

Educated at Rutgers-Newark and Seton Hall Law School, Koeppe was President and COO of Bell Atlantic and PSE&G. He served as President of the Newark Alliance and formerly chaired the State Economic Development Administration and the New Jersey Schools Development Authority. He was the recipient of the 2013 Steven J. Diner Ethical Leadership Award.

This Italian-American businessman is best known for being the founder and president of the NY Waterway. Imperatore began his business career in 1947, founding what would become the fourth largest trucking company in the U.S. In 1981, he purchased a 2.5-mile length of waterfront in Weehawken and West New York from the Penn Central Railroad. In 1986 this land was used to begin the NY Waterway ferry service between Weehawken and Manhattan. The former Arthur E. Imperatore School of Sciences and Arts of Stevens Institute of Technology, in Hoboken, New Jersey, was named in his honor.

Singer, composer, actress, entertainer, and publisher Connie Francis was born in Newark, NJ, and educated at Arts High School, Newark. She has toured the US, Australia, New Zealand, South Africa, and Europe, owned publishing companies, and has made many records from the 1950s onward including hits like “Who’s Sorry Now” and “Stupid Cupid.”

Born in Stratford, NJ, Ripa has co-hosted syndicated talk show for 15 years: Live! With Kelly, previously Live! With Kelly and Michael and Live! with Regis and Kelly. She spent 12 years playing Hayley Vaughan Santos on the soap opera All my Children, for which she won three Daytime Emmy Awards.

This native of Newark, NJ, is known for his portrayals of Henry Hill in the crime-drama Goodfellas and Shoeless Joe Jackson in Field of Dreams. He won an Emmy Award and was nominated for Golden Globe and Screen Actors Guild awards. He won his Emmy for Outstanding Guest Actor in a Drama Series for his role on the medical drama ER.

American pop-rock musician, singer, songwriter, and record producer, Tommy James is most widely known as the leader of the 1960s rock band Tommy James and the Shondells. The group first recorded at a local radio station in 1964, and became best known for their hits “Hanky Panky” and “I Think We’re Alone Now.” James eventually went solo and recorded two Billboard Hot 100 top 20 chart hits, along with eleven other Hot 100 hits.

Wyclef Jeanelle Jean is a Haitian rapper, musician, and actor. At the age of nine Jean moved to the United States with his family where he spent much of his life. Jean graduated from Vailsburg High School in Newark, NJ. He first achieved fame as a member of the acclaimed New Jersey hip-hop group The Fugees. Jean won three Grammy Awards for his musical work.

Born Mildred Lisette Norman in Egg Harbor City, NJ, Ms. Pilgrim was an American non-denominational spiritual teacher, mystic, pacifist, vegetarian activist, and peace activist. In 1952 she became the first woman to walk the entire length of the Appalachian Trail in one season. Ms. Pilgrim also walked across the United States at least eight times—likely more than 20 times. Starting on January 1, 1953, in Pasadena, CA, she adopted the name “Peace Pilgrim” and walked across the United States for 28 years.

Kearny served as a United States Army officer and was notable for his leadership in the Mexican-American War and American Civil War, during which he commanded the First New Jersey Brigade. He was killed in action in the 1862 Battle of Chantilly. The town of Kearny, NJ, where he had his estate, is named in his honor.

Known as the “Bayonne Brawler” and the “Bayonne Bleeder,” the heavyweight boxer was a heavy underdog when he went fifteen rounds with world heavyweight champion Muhammad Ali in a 1975 title fight. Wepner claimed that he was the inspiration for the movie Rocky.

Grier played in NFL for the New York Giants and Los Angeles Rams from 1955–1966, and was honored as a two-time Pro Bowler. As an actor, Grier has appeared in numerous films and TV shows. Has also written several inspirational books and is an inspirational speaker. Grier spent his high school years in NJ and played high school football at Abraham Clark High School in Roselle, NJ.

Find information on all of our past inductees at njhalloffame.org.

To view past induction ceremonies, visit the NJ Hall of Fame YouTube channel at www.youtube.com/user/NJHoF

About the Author: Norris Clark